The Case for Growing and Feeding More Alfalfa 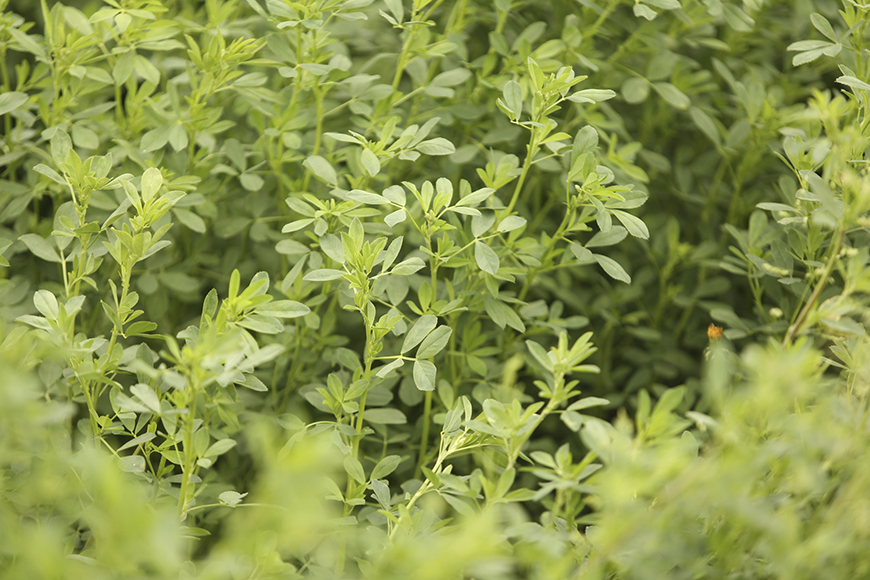 It’s safe to say alfalfa is one of those crops that checks a lot of boxes for growers and dairy producers. Good crop rotation partner, check. Soil health supercharger, check. Carbon storer, check. Good source of dietary fiber, check. Better amino acid profile than corn or cereal silages, check. The list of benefits goes on and on for alfalfa.

Though these benefits have been apparent for a long time to growers and producers, these aspects are creating a resurgence of interest in alfalfa as areas like sustainability and carbon markets and sequestration drive interest not only at the farmgate, but at the consumer level as well.

As the conversation about carbon sequestration continues to grow, it’s placing alfalfa in a prominent position as a super accumulator of carbon. Since it’s a perennial with a three-plus year lifespan, the need for tillage is dramatically decreased. But what really sets alfalfa apart is what lies beneath the surface.

With a massive root system underneath each plant, this creates an ideal vehicle for long-term carbon storage. This allows growers to develop a “sink” for carbon and hold it at deeper depths. At the same time, these root systems are delivering value to the grower beyond carbon sequestration.

To Brown, the benefits to the land of growing alfalfa have been a firsthand experience. To this day, Brown can pick out an area on a yield map that had been planted with alfalfa 15 years ago. And though the nutritional benefit is likely long gone, the benefit to the soil structure is still there, increasing the yield potential and making this part of the field more profitable.

In agriculture, the product that has the largest carbon footprint continues to be nitrogen. Two tons of CO2 are produced during the manufacturing of each ton of anhydrous ammonia. Keep in mind, 160+ units of nitrogen are applied per acre to produce a corn crop.

Excess fertilizer nitrogen not used by the crop can also have a negative effect on the environment. This excess nitrogen is susceptible to denitrification, which produces nitrous oxide, a greenhouse gas (GHG) that is 300 times more detrimental to the environment than CO2. Managing nitrogen is the key to reducing the GHG footprint of agriculture.

“When you think about a beef producer or a company trying to make downstream sustainability claims, what they’re interested in is carbon sequestration and the carbon footprint of a crop that is grown,” Brown says.

This is a place where alfalfa once again shines. Alfalfa naturally produces nitrogen, which remains in the soil and has the potential, if managed correctly, to supply the majority of nitrogen to the following corn crop. In some cases, alfalfa can provide some nitrogen credits into the second year after stand termination. Alfalfa also scavengers for and captures — thanks again to its root structure — nitrogen from deeper depths, which helps reduce nitrous oxide emissions. The combination of these characteristics helps reduce the need for applied nitrogen and the risk of nitrate making its way through tile lines and into streams.

For those livestock producers feeding harvested alfalfa, the forage serves as an ideal base for a ruminant diet. With a number of nutritional benefits, David Weakley, director of dairy forage nutrition research for Forage Genetics International, points to three key advantages: When compared to corn silage, alfalfa wins in the protein delivery category as well. Typically, alfalfa is higher in the amino acid lysine than corn products and byproducts, thus complementing high corn-based diets.

“Nutritionally, alfalfa has a higher protein and higher rumen degradable protein content than other forages. Really, no other forage comes close. That’s important because higher rumen degradable protein content is what supplies most of the nitrogen requirement for the microbes in the rumen, which in turn supplies about 50% of the protein requirement in dairy cows. In beef cattle, that figure is even higher,” Weakley says.

In the situation where a dairy producer is feeding a high corn-based diet, they must supplement protein through either purchased compound feeds or high protein ingredients. Typically, these protein sources are soybean meal, canola meal and distiller’s grains. But currently, the prices of these high-protein ingredients are expensive.

“If you’re a dairy producer with a high corn-based diet, and you’ve been buying a lot of protein supplements, and the price of those supplements or high-protein ingredients are going up accordingly, you will likely want to offset those costs. One way to do so is to replace some of your corn silage with alfalfa. That’ll reduce the need to purchase as many of those feed supplements or high-protein ingredients. This should help reduce the overall cost of the ration,” Weakley says.

Contact your local WinField United retailer to learn more about how alfalfa could benefit your operation or browse the advanced alfalfa varieties offered by CROPLAN® to find the right match for your fields.

© 2021 WinField United. Important: Before use always read and follow label instructions. Crop performance is dependent on several factors many of which are beyond the control of WinField United, including without limitation, soil type, pest pressures, agronomic practices and weather conditions. Growers are encouraged to consider data from multiple locations, over multiple years and to be mindful of how such agronomic conditions could impact results. CROPLAN and WinField are trademarks of WinField United. All other trademarks are the property of their respective owners.

How Are XtendFlex® and Enlist E3® Soybeans Performing In 2021?

Plan for Seed Purchases After a Tough Year