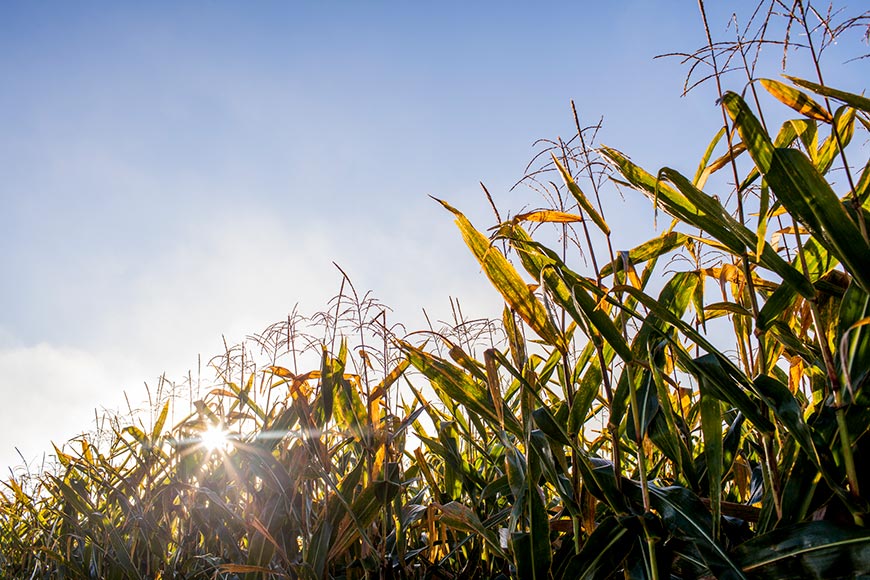 This summer, WinField United is testing and aggregating the in-season recommendations of the R7® Field Forecasting Tool across the country on what we’re calling Sentinel Plots. Over the next several months, we’ll be talking with the agronomists who are managing several of these plots and posting updates about what the tool is recommending, what actions are being taken as a result and what progress is looking like at that point in time.

All Sentinel Plots are planted in corn. Here is the first installment.

This Sentinel Plot is situated on sandy, irrigated land along the Wabash River. The farmer who owns the land was very interested in learning some in-season management strategies he could use to really push yields.

Nitrogen management
In this plot, as well as in other fields where I’m using the R7 Field Forecasting Tool, the amount of nitrogen we’ve applied this season is greater than what we would apply in other more “normal” (e.g., less wet) years.

Early in the season, the model indicated a fairly substantial nitrogen deficit. My recommendation to the grower was that he not rely solely on the nitrogen he was applying through his irrigation system. I suggested he should also apply some dry nitrogen fertilizer (urea and ammonium sulfate) over the top of the crop. He did, and we saw a dramatic visual improvement in the field as well as a corresponding improvement in yield prediction within the model.

We take tissue samples weekly and have used the scenario feature in the tool. This has allowed us to run some different sequences as far as timing and amount of nitrogen to apply so that we can do what is most advantageous for both yield and ROI potential.

For example, several times throughout the season when the grower runs the pivot, he’s applying 8 gallons of 28% nitrogen solution and 2 gallons of ammonium thiosulfate. So about 26 pounds of nitrogen is applied each time through the irrigation system. Based on what the tool is telling us, each of those applications is adding around 15 bushels per acre in yield potential.

Yield predictions
The biggest eye-opener for the grower has been the yield number the R7 Field Forecasting Tool is projecting for this field: nearly 220 bushels per acre. There are fields in the same area that are quite variable and nutrient deficient that probably won’t have very good yields this year. But because of the farmer’s in-season management and the actions we’ve taken, the field looks very uniform. Based on my current observations, I think the tool is correct and the actual yield will be in excess of 200 bushels per acre.

Knowing the projected yield gives the farmer the confidence to invest in inputs like a fungicide application, an insecticide application and additional micronutrients. The tool has provided reassurance that despite the challenging weather conditions we’ve had, there is a logical reason to use inputs that could help him turn what could have been a bad situation into a good outcome.

This Sentinel Plot is situated on nonirrigated land. The farmer applied 100 units of nitrogen (anhydrous ammonia) about two weeks prior to planting. Corn was planted around April 11 using a variable-rate seeding method.

Nutrient management
The growing season started off rainy. We used the R7 Field Forecasting Tool to tell us how quickly we were going to become nitrogen deficient because of the excessive moisture and to recommend which kind of nitrogen to use. We also took tissue samples to see where the plants stood nutritionally. We debated whether to use nitrogen in urea, ammonia nitrate or ammonia sulfate form. We decided to apply an ammonia nitrate–ammonia sulfate mix, because the soil needed sulfur and it needed nitrogen to be available quickly.

Later in the season, the model indicated we would need more nitrogen to finish out the crop, so we decided to make an aerial application of urea at V16, right before a predicted rainfall. We applied 46 units of nitrogen by air at about 50 cents per unit, making the cost of application about $23 an acre, plus other miscellaneous costs. So about $30 an acre is what it cost us to do that application. It bumped up our yield potential about 15 bushels per acre. With corn at approximately $4 per bushel, it was an easy decision to make that application in order to potentially make an additional $60 per acre.

Yield predictions
At the beginning of the season, the predicted yield shown in the R7 Field Forecasting Tool was lower than what we wanted to see and lower than it has been historically — just over 150 bushels per acre. I was thinking that this couldn’t be right. But at that time, our solar radiation was also much lower. Just before our aerial nitrogen application, yield was predicted to be about 160 bushels per acre. Sunny, dry weather played a part in that increased yield potential. Today, the R7 Field Forecasting Tool is projecting our yield to be 182 bushels per acre. As we near the end of the season, we’re now starting to get more solar radiation, so yield predictions could increase even more. The tool has actually done a good job of adjusting yield predictions according to the increase in solar radiation we’ve received over the course of the season.

Accurate calibration
The thing about a crop modeling tool like the R7 Field Forecasting Tool is that it evolves. It operates on data, and the more data you feed into it and the higher the quality of that data, the better you make the tool. I tell farmers that even if the tool is suggesting something they don’t ultimately end up doing, to make sure they record their management decisions in the tool so we can properly calibrate it and make it more precise. Farmers use the tool to help them manage according to the information they have up to that point. And that’s going to be much more efficient than just relying on history.

Nitrogen management
We took tissue samples and performed a pre-sidedress soil nitrate test. The R7 Field Forecasting Tool recommended a side-dress nitrogen application for both the stabilized and unstablized portions of the field, although it did indicate that the stabilized section had more nitrogen available for uptake than the unstabilized section.

Since soil and tissue sampling can be somewhat labor intensive, we found that when we used the R7 Field Forecasting Tool to identify parts of the field that looked low on nitrogen, we really only needed to do soil and tissue samples on those and ground truth them to confirm a lack of nitrogen. That way, we only had to sample about 25% of all the fields, because the other areas indicated adequate nitrogen and no yield loss. If the tool tells us which areas have adequate nitrogen, we can concentrate our efforts on sampling problem areas instead.

The R7 Field Forecasting Tool indicated that if we did an in-season side-dress application of up to 50 units of nitrogen per acre, we could gain a return on our investment of an additional $18 per acre on the nitrogen-stabilized portion of the field and about $30 per acre on the other half.

Tassel date
Due to our cold, wet spring, Minnesota corn was barely knee high on July 4, when in other years it’s at tassel. Interestingly, the R7 Field Forecasting Tool is predicting a tassel date of July 20 or 21. I was surprised to see tassel predicted so soon. If this is the case, corn will reach black layer maturity much sooner, because we know there are about 60 days from tassel to black layer. Sixty days from July 21 is September 21, and the average first killing frost for this part of the country is about October 1. If this tassel date is correct, farmers can be confident that some of their later-planted corn still has a good chance of reaching a normal maturity date in mid- to late September. Right now, our biggest threat is an early frost.

Yield predictions
Yield predictions for this Sentinel Plot have probably swung 70 bushels from the start of the season until now. Usually, yield projections decrease as the season progresses. This year, our side-dress nitrogen application caused that number to go up substantially. The tool provides a game plan almost from the beginning, and then it’s up to the farmer to implement those recommendations. Right now, our maximum yield prediction for the Sentinel Plot is 273 bushels per acre.