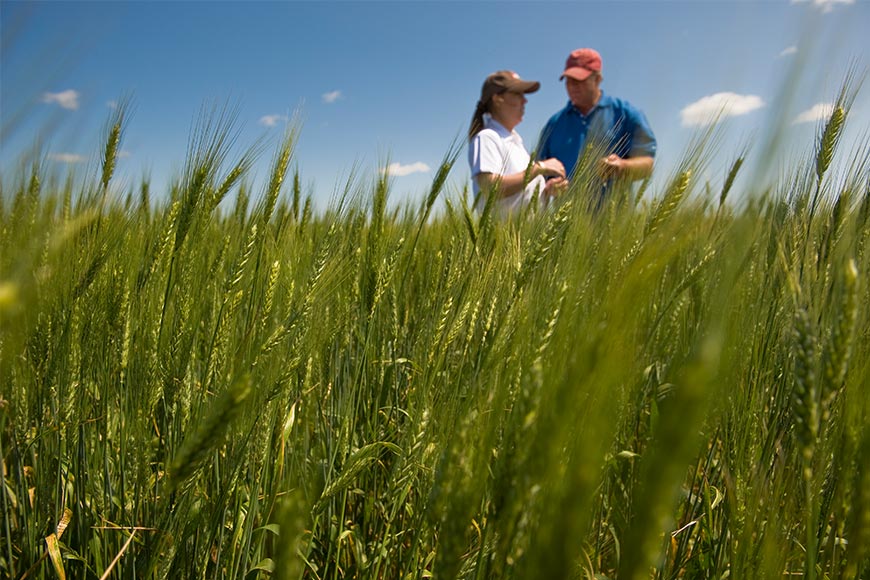 Two farmers recently attained top-five finishes in the National Wheat Yield Contest dryland category with CROPLAN® spring wheat varieties. Here is a snapshot of how the farmers — both first-time entrants in the competition — achieved these wins.

National Winner, Second Place
Jon Iverson
Langdon, North Dakota
Yield: 97.6 bu/A
County average: 54 bu/A
Increase over county average: 80.69%
Variety used: CROPLAN® 3530
In addition to wheat, Jon Iverson grows peas, flax, barley, canola, corn and soybeans on his 3,500-acre operation in northeastern North Dakota. He saw how promising CROPLAN® 3530 looked in North Dakota State University field trials as well as a local trial in Langdon and decided to plant it on 224 acres. For management, he: “In our area, 2017 was a good wheat year,” says Craig Leas, master agronomy advisor, WinField United, who is Iverson’s agronomic advisor. “It got a little dry toward the end of the season, but we received rain pretty much when we needed it.”

Iverson, who has been farming for nearly 30 years, uses minimum tillage on his operation and was pleased with the results from planting 3530. “These are the best wheat yields I’ve ever had on the farm,” he says of his winning crop. “I already have a little more than 300 acres of 3530 booked for next year.”

CROPLAN® 3100 is a WinPak® variety, which is a blend of two varieties designed to increase field averages by strengthening lower-yielding parts of the field and buffering the effects of weather and other stresses. “This variety handled drought and heat stress well, on varying topographies,” says Curt Droogsma, district sales manager with Winfield United seed who works with Yerger. “Some of John’s fields have low spots with higher water-holding capacity and higher yield potential, and others have hilltops where yields aren’t always as high.”

Yerger planted the 3100 WinPak® variety on a no-till field. His management consisted of: “After we planted 3100, we were a little droughty, but then we caught one rain and it just bloomed from there,” says Yerger. “All of our dryland is no-till, which can save a couple of inches of moisture, too.”

Yerger’s management is aggressive, says Droogsma, particularly with his use of Ascend® plant growth regulator. “We don’t get a lot of producers who are willing to invest in Ascend® for wheat — especially dryland wheat,” he says. “But we’ve had good success with it: better seedling vigor, better stand establishment and bigger root systems to help improve yield.”

You can find out more about CROPLAN® wheat varieties here.