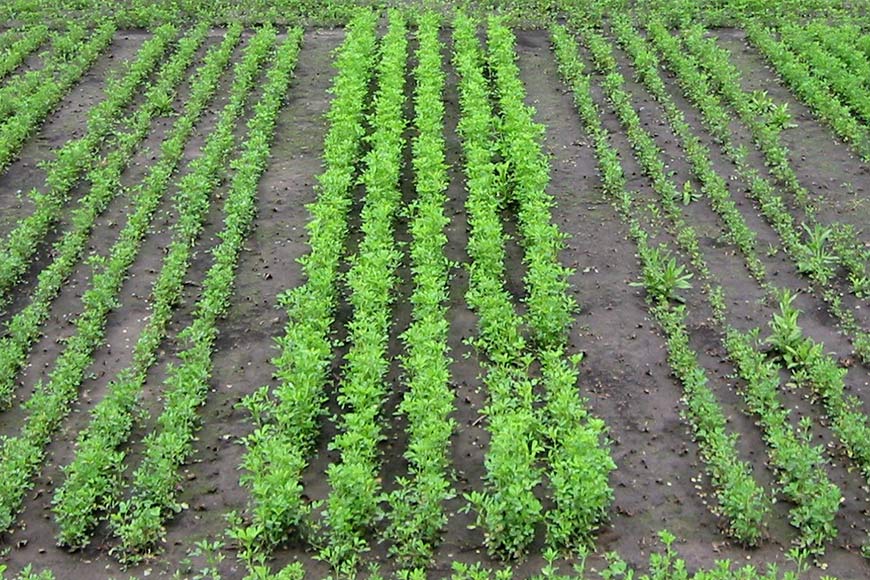 Root and plant diseases that affect alfalfa yield and quality are nothing new to farmers. Diseases can be difficult to identify and manage, and it can be hard to understand their impact on plant health.

Recently, a new race of anthracnose and an additional aphanomyces root rot pressure have been identified. Researchers are working to get a good handle on both in terms of severity and how widespread they are becoming. Diseases cause additional stress to the alfalfa plant, limiting stand life and crop quality. Perhaps even more frustrating, these diseases continue to persist and survive in an ever-changing strain or race. It seems when we start to understand the symptoms and management of one, a new variation appears.

Farmers need to understand the visual symptoms, the disease cycle and the most effective strategies for managing aphanomyces and anthracnose to help reduce the effect they can have. Here is a brief overview of each disease: how to identify them, where they’re most likely to appear and how to protect your alfalfa stand.

Anthracnose
A severe stem and crown disease that causes defoliation, the appearance of anthracnose in a field is largely dependent on weather. It strikes when growing conditions are warm and moist, usually later in the season. Where I live in eastern Ohio, anthracnose usually hits in July or August. That would be the same timeframe in alfalfa-growing states farther north like Wisconsin and Minnesota.

Anthracnose can cause yield losses of up to 25 or 30 percent. If severe enough, it can kill alfalfa plants. Four different races of anthracnose have been bred for resistance in alfalfa. A new race, Race 5, was recently confirmed by researchers at Forage Genetics International (FGI), a leading forage research company; and by the USDA’s Agricultural Research Service.

Symptoms: On susceptible plants, stems have large, sunken, oval- to diamond-shaped lesions. Larger lesions are straw colored with brown borders. Smaller lesions can eventually enlarge and join together to girdle and kill one to several stems on a plant. Girdled stems may wilt suddenly and exhibit a “shepherd’s hook.”

Geography: Anthracnose Races 1 to 4 affect largely the eastern half of the United States, from southeastern Minnesota, Iowa, Missouri, Arkansas and eastern Louisiana to the East Coast except for the New England states. So far, Race 5 has been limited to the Midwest and East, where high humidity and moisture is present during the growing season.

Management: Your first line of defense is selecting an alfalfa variety with built-in multi-race anthracnose resistance. For susceptible varieties, anthracnose can be managed with certain foliar-applied fungicides, but application timing is important. If you anticipate very warm, humid and wet conditions, a fungicide application should be considered. Apply on crop regrowth when plants are 4 to 6 inches tall. If you see anthracnose symptoms already present in your fields and your alfalfa is more than 18 inches tall, it’s likely too late to prevent further damage to that crop. A more beneficial approach would be to wait and apply a fungicide on the next crop regrowth.

Look to your agronomist for advice on variety selection as well as fungicide application needs and timing for your farm.

Aphanomyces in alfalfa may resemble other diseases, nutrient deficiencies, or herbicide damage. Heavy, wet or compacted soils can limit oxygen availability resulting in limited root nodulation, and leaves begin to appear light green. Talk with your agronomist about what the cause of your poor roots could be. It may necessitate taking soil samples for lab testing and diagnosis.

Geography: Aphanomyces Race 1 is widely identified in the Midwest, East and areas of the Pacific Northwest. Pockets of Races 2 and 3 have been found in parts of the Pacific Northwest and Mountain West. But Races 2 and 3 are primarily found in a wide swath from Minnesota, Iowa and the eastern part of Missouri on the west side, down through Kentucky and north up through Pennsylvania, West Virginia, Pennsylvania and into New York on the east side.

Management: To help mitigate risk of aphanomyces, plant a variety with high resistance to multiple races. Also choose a fungicide seed treatment that can provide additional protection. A seed treatment can provide resistance for 45 to 60 days after planting, which helps get plants off to a healthy start. After that window of time, the genetic resistance to aphanomyces will kick in. Newer alfalfa varieties with multi-race aphanomyces resistance are bred to allow plants to establish healthier roots in wet soils. When the soil dries out, the root is then better able to recover and extract nutrients.

High management is key
There are key management precautions that are critical to a successful alfalfa crop: proper seed bed preparation, the right planting depth, adequate fertility, and weed and insect control. Regardless of the genetic potential of elite alfalfa varieties, poor management can significantly impact the long-term production of the stand.

If your soils and environment are prone to disease pressure, you roll the dice if you are not selecting a variety with built-in resistance. This could certainly impact the total quantity and quality of the long-term success of the stand. Replants are an expensive second chance.

Ongoing research
As alfalfa growers and dairymen struggle with managing anthracnose and aphanomyces, it’s good to know that alfalfa breeders are constantly developing varieties with improved resistance. When you are talking about a potential 25 or 30 percent yield loss, that’s a big deal. Shorter stand life is a big deal. And loss of quality is a big deal. These are all things you may be dealing with. You can manage these issues to the best of your ability through variety choices and timely fungicide applications, along with good weed and insect control and fertility.

Scout your alfalfa fields regularly, and always keep your agronomist and your locally owned and operated WinField United retailer in the loop so you can respond to visible symptoms in a timely, effective manner.

Make This Adjustment to Help Reduce Dicamba Drift Potential in 2020

The Seven Most Expensive Words in Farming