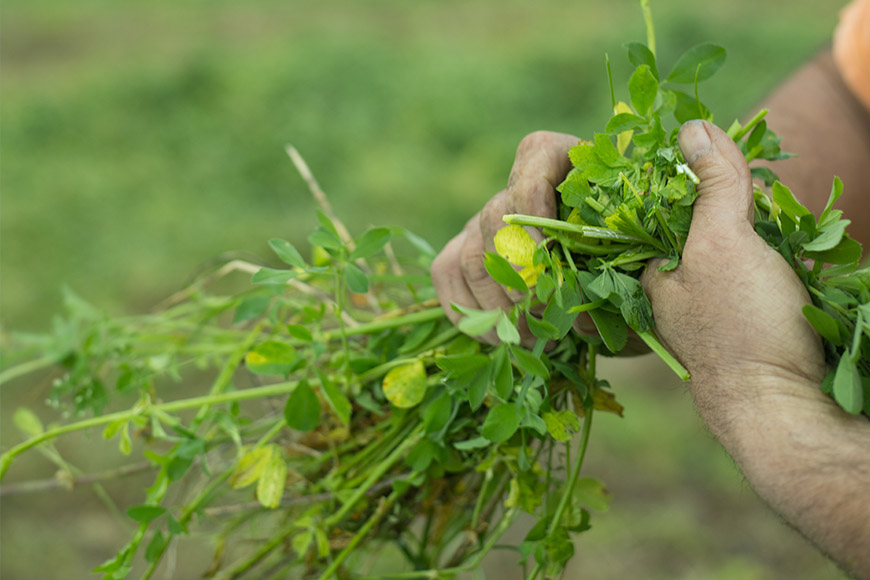 First, some basics of alfalfa growth. The root system of alfalfa dies back to some extent each winter and after each cutting. The root system requires good soil moisture to regrow. If a strong root system forms, then high yields will occur. If the root system growth is restricted by dry soil, then the top growth will be reduced, even if good rain occurs in the later part of the cutting growth period. Consider that rain in the last two weeks of a growth cycle is largely for alfalfa regrowth and yield of the next growth cycle.

Moisture stress has the following effects on the alfalfa plant:

NDF is generally decreased, though effect varies with severity/timing of moisture stress. Thus, alfalfa from drought-stressed fields is often lower yielding but of higher forage quality. This is the opposite of drought-stressed grass fields.

2. Regrowth from crown buds will begin after alfalfa has initiated flowering, likely resulting in two different growth stages in the field at the same time. This complicates harvest decisions because the regrowth from the crown uses energy stored in the roots that the plant will not have had time to replenish. Delaying cutting may decrease forage quality and the number of cuttings; however, it will promote stand persistence by supporting plant survival during the drought, and it will save on harvest costs. If areas of the field vary in maturity, base harvest timing on the least mature plants in the field.

3. New seedings should not be harvested during drought stress but an early season cutting, when moisture is adequate could be taken. New seedings may also be harvested in late fall if adequate growth is present to harvest. The key is to time fall harvests so that alfalfa either has no regrowth or more than 8 inches of regrowth at the first killing frost.