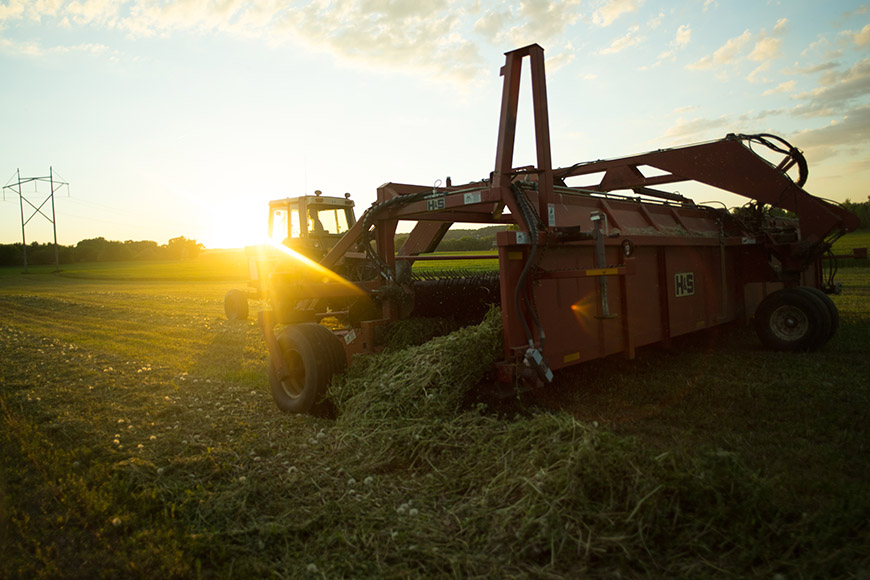 The additional consideration is that the first 15% water needs to be removed quickly (for either hay or silage making) to reach 60% moisture or less to minimize starch and sugar loss due to respiration. If this initial drying process is prolonged, then unnecessary amounts of readily digestible carbohydrates can be lost, lowering the overall nutritional value of the forage.

The most important factor in drying forage is sunlight. If we make a wide swath, we are increasing the surface area of the forage that is exposed to sunlight, increasing the drying process. If hay is put immediately into a windrow, only a fraction of the sunlight is used to dry the forage and the remainder is covered by other forage or falls onto the soil.

Alfalfa has a waxy surface on the leaves to minimize water loss when the plant is growing. These leaves have holes (stomates) on the underside that open during the day allowing water evaporation to cool the plant and close in the dark to preserve water. If hay is spread wide, more stomates are in the sunlight and stay open so the forage dries faster than if hay is put into a windrow where stomates are in the dark and close. When stomates are closed, the leaf is between two “closed” waxy layers and dries slower.

Further, when hay is put immediately into a windrow, the humidity in the windrow exceeds 90% in 30 minutes or less after which internal windrow drying is very slow. This is why the interior of a windrow appears wet, almost as if it had been cut a day later.

These differences all play significant roles in the drying process and are why it is recommended to increase the width of your swath during the harvesting and baling process.   Research from University of Wisconsin compared the drying process of forage placed in a wide swath (72% of cut width) compared to alfalfa that was immediately placed in a narrow swath (25% of cut width). Alfalfa was mowed with a discbine, conditioned, and moisture content was monitored prior to ensiling. Forage quality was also sampled approximately two months after ensiling in tubes.

Alfalfa that was placed in a wide swath reached 20% moisture at the end of the day after mowing, whereas alfalfa that was placed in a narrow swath (25% of cut width) did not reach 20% moisture until the third day, a significant decrease in drying rate (Fig 1.) There were no other differences in forage management, and these comparisons were made from alfalfa treatments that were in the same fields at two different locations in WI.

Some are concerned that driving over a swath will increase soil (ash) content in the forage. In Table 1, the ash content of haylage from wide swath alfalfa was insignificantly different to narrow windrows. While narrow windrows are not usually driven over, they tend to sag to the ground causing soil to be included with the windrow when it is picked up. Wide swaths tend to remain on top of the cut stubble off the ground. Further, driving on the swath can be minimized by driving one wheel on the area between swaths (if swath is less than 100% of cut area) and one near the middle of the swath where cut forage is thinner.

Grasses, especially if no stems are present, must be placed into a wide swath when cut. If placed directly into a windrow at cutting, the forage will settle together and dry very slowly, requiring an additional operation such as tedding to increase drying rate.

When buying new mowers look for those machines that make the widest swath. Also consider that, if only making haylage or baleage, a conditioner may not be necessary which will allow even wider windrows.