Find Ways to Have Success on Saline Acres 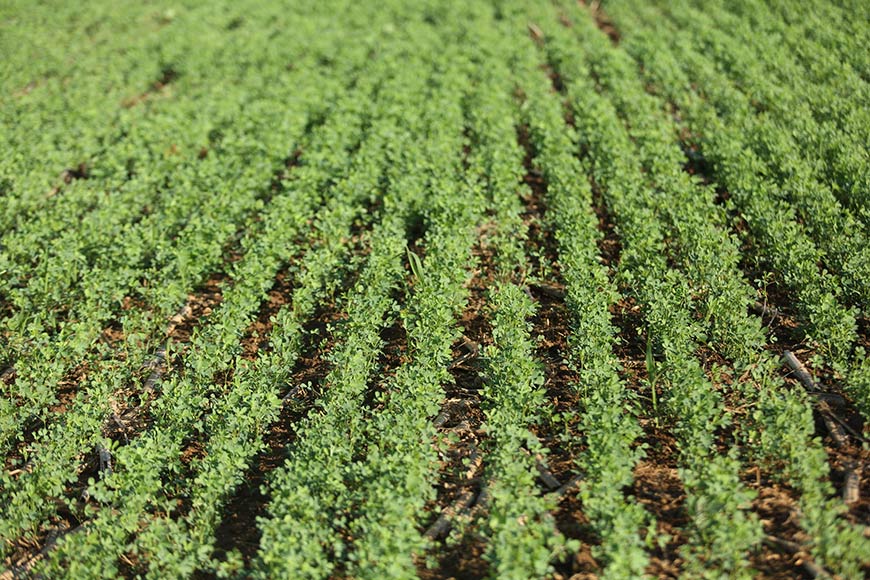 With 14 to 15 million salt-affected acres in the United States, it’s clear that managing saline soils is a big challenge for some farmers. Typically those acres are found in western states where limited rainfall and a reliance on irrigation causes salts to build up in the soil. To determine how to best manage their alfalfa crops on these tough acres, first farmers have to identify the root of their production problems.

Oftentimes a salinity problem goes undetected, while field production is declining. Salinity can reduce yields by anywhere from 5% to 15%, but farmers may not realize salt is the root of the problem. Obvious symptoms could be the white crusting on the soil’s surface or potholes in fields that have been affected by high water tables. Farmers may notice that their alfalfa looks drought-stressed or lacks vigor, which could also indicate a salinity problem.

One way to confirm that saline soils are causing problems in fields is to conduct soil testing. Unfortunately, most standard soil tests don’t offer the level of analysis needed to diagnose salt problems in soil. In order to manage fields and make appropriate crop decisions, growers should test the electroconductivity (EC) and exchangeable sodium percentage (ESP) of their soils. Armed with those values, they can work with their local agronomist to determine how to best manage problem acres.

When EC levels get to 6.8 to 7, it’s not uncommon to see yield losses in alfalfa of up to 50%. When ESP levels hit 3% to 4%, conventional alfalfa varieties that have not been bred for salt tolerance will begin to lose vigor. Understanding your soil test results for EC and ESP can help determine whether those acres are suitable for salt-tolerant alfalfa varieties.

Research conducted by WinField United has shown that some new salt-tolerant alfalfa varieties can maintain good quality and yield potential at ESP levels three to four times the acceptable levels for growing conventional alfalfa. However, in some cases, high saline soils are not conducive to growing any crop. It’s best to work with your agronomist to assess soil health and determine if a salt-tolerant alfalfa variety is a viable option for your acres.

Are salt-tolerant alfalfa varieties the answer?

In recent years, salt-tolerant alfalfa varieties have been bred to help improve production on saline acres and can boost yield and quality potential while increasing the longevity of their stands on tough saline acres.

To get the best salt-tolerant alfalfa varieties to market, some alfalfa breeders are using a three-tier testing strategy that includes germination analysis, forage testing and rigorous replicated field trial testing. Throughout all stages of testing, varieties are observed for their tolerance to high-salt environments. Breeding nurseries are also employed for continued variety advancement. Salt stress can inhibit germination or cause plant burning that eventually leads to seedling mortality. If plants survive germination and emergence, they still have to contend with high-salt-concentration irrigation water, which can reduce plant vigor. Alfalfa breeders are testing salt-tolerant varieties in these high-stress environments and only advance the most promising performers to the next stage of testing.

As a result of this comprehensive testing strategy, several new salt-tolerant alfalfa varieties are now commercially available to help farmers manage production on their saline acres. These varieties feature the newest alfalfa genetics plus the benefit of extra tolerance to salt in the soil.

In addition to considering salt-tolerant alfalfa varieties, farmers should employ other best management practices to get the most from their saline acres. That includes testing irrigation water to determine salt concentration and making amendments if necessary. Aerial imagery can help identify trouble areas in fields, and further investigation can help determine if these areas could benefit from additional drain tile or soil amendments to maintain sufficient pH levels.

Salts accumulate in soils over time and are hard to remove from the soil profile once they are established. Poor irrigation practices or excessive irrigation can compound the problem by building up water tables and forcing salt to the soil’s surface. When water evaporates from the soil, it leaves behind the concentrated salt particles, and farmers may notice white crusting on their fields. Testing irrigation water for salt levels and doing fresh water irrigation flushes can help identify and alleviate the buildup of salt in soil.

Poor field drainage can also contribute to an accumulation of salt in the soil. Introducing drain tiles or other cultivation can help alleviate the excessive water that can cause salinity issues. Heavy tillage done on coarse ground can accelerate the evaporation of water and deposition of salt on the soil’s surface, so managing field traffic on heavy soils is an important management practice to consider.

Managing saline soils involves plenty of troubleshooting to determine which specific management steps should be taken to improve production. Farmers should work with their local agronomist to take the appropriate soil tests to see if salt-tolerant alfalfa varieties are a good fit for saline acres. Your advisor can also recommend other management practices that can improve success on saline acres.

© 2019 WinField United. Important: Before use always read and follow label instructions. Crop performance is dependent on several factors many of which are beyond the control of WinField United, including without limitation, reduced performance, and/or crop damage due to environmental factors such as variations in rainfall, temperature, crop production patterns and other factors. Growers are encouraged to consider data from multiple locations, over multiple years, and be mindful of how such agronomic conditions could impact results. WinField® is a trademark of WinField United.

Take a Stand on Alfalfa Health

Enhancing Sunflower Crop Performance: How to Go From Good to Great