Taking homemade to a new level 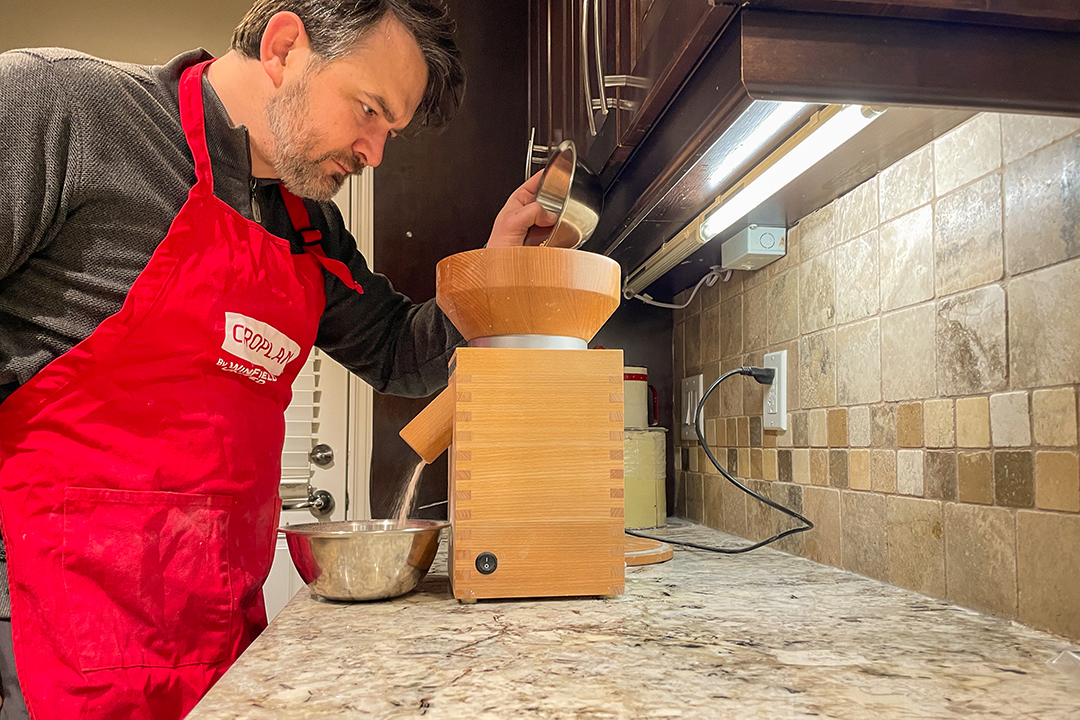 For the last 15 years, Taylor Wildeman, director of technology at WinField United Canada, has had a goal of trying to make really good food out of simple ingredients. And while he has worked at it over several years, when COVID hit in 2020, that’s when things really took off.

“Like many when COVID hit, I needed something to do and I had always played around with learning how to bake buns and bread, but I was never good at it. I knew that my mom was good and my grandma was really good at baking bread. So, it was just one of those skills that I thought was great to learn how to do,” says Wildeman.

So, in March of 2020 Wildeman started his bread baking journey.

“I committed to baking at least once a week and it ended up being twice a week,” he says.

After a few months of work on his new craft, Wildeman found a really great bread recipe that worked.

“After a few months I felt like I had perfected white bread. I needed a new challenge, so that’s when I started thinking about milling my own wheat and working on the perfect whole wheat loaf,” explains Wildeman.

Wildeman thought that milling wheat would be a really great connection with his love for farming. He grew up on a cattle feedlot but hasn’t been actively connected to a farm since finishing high school, other than helping a friend from home during harvest.

“I go back and help a good friend of mine who farms. I run grain cart or other stuff that no one wants to do. And apparently, I'm the best combine windshield washing guy,” Wildeman laughs. “Everyone has a role to play, and I just know that's my skill set on the farm. So, I do go back and, I love it. It's the best time.”

Wildeman thought milling wheat would also be a way utilize the amazing ingredients that are basically in your backyard in Saskatchewan .

“Canada has such an abundance of great flour and where does it come from? It comes from stuff that we're producing right in our own backyard, that my friends are producing,” he says.

With his love for really fresh ingredients and desire to be more connected to the farm, Wildeman started his milling journey in the summer of 2020.

“I was going to buy this simple little thing to attach to my Kitchen Aid mixer at the time, and then my Kitchen Aid broke. So, that opened up the possibility for other options. I found this little mill that I have today. It seemed to be more than I wanted to invest, it was what some small-scale bakeries were using. But I said, ‘if I'm going to do this, I might as well!’ Worst case scenario I just sell the thing,” he explains.

Wildeman got to work milling his wheat and bought his first 25-pound bag from Nunweiler’s Flour Company in Hague, Sask. The milling process went well, but what took some time getting right was incorporating his whole wheat flour into a delicious loaf of bread.

After a few failed attempts, Wildeman accidentally produced a really good loaf of about 30-35 per cent whole wheat bread.

“The first one was terrible and then the second one was just like lights out. Super delicious, soft inside, hard crust on the outside,” remembers Wildeman. “And then I screwed up like seven batches after. But if I didn't have that one, I might have gotten down in the dumps, but that second one was so good I was inspired to stick with it.

“I failed a few times and that made me rethink my proportions. So, that first good one, once that kind of happened I knew I could do this.”

Today, Wildeman is sticking to his 30-35 per cent whole wheat bread recipe until he perfects it.

“I sometimes play with the hydration, a pan of water underneath for steam. I’ve played with lots of different variables and have settled on what I think is the perfect 625-gram loaf, in a certain pan at 420 degrees Fahrenheit for 40 minutes, and then 375 for the remainder of time it needs. I don't know if that's good or bad, but that's what's working for me,” he says.

Wildeman plans to keep perfecting his new skill and hopes to continue to explore cooking and baking with farm to table ingredients because he thinks it’s important for people to understand where their food comes from.

“Every year, less and less people are connected directly to the farm, myself and my two kids included. Farm sizes are getting bigger and urban population is increasing. That combination means less people in rural and less directly connected to where our food comes from. As a consumer, I want to know where my food comes from and as a father, I think its important my children understand this too. I think by doing that, you have an appreciation for what you think is simple is actually harder than it looks,” says Wildeman.

Wildeman also puts the challenge out to others to try making their food from scratch.

“If an accountant can make a loaf of bread, then so can anyone else out there. The challenge is out there for others to try and do the same,” he says.

A great way to put this challenge into action is on Canada’s Ag Day on February 22. Cook something new, bake an old favourite and share away (literally and on social media). When it comes to your ingredients, think about where they came from and how they are produced then post online to celebrate all the amazing food that comes from our country

To learn more about Canada’s Ag Day, visit https://agriculturemorethanever.ca/cdn-ag-day/ and check out what you can do to celebrate where our food comes from and the farmers who work hard to provide us with safe and healthy meals.

4 Tips For Managing A Late Harvest