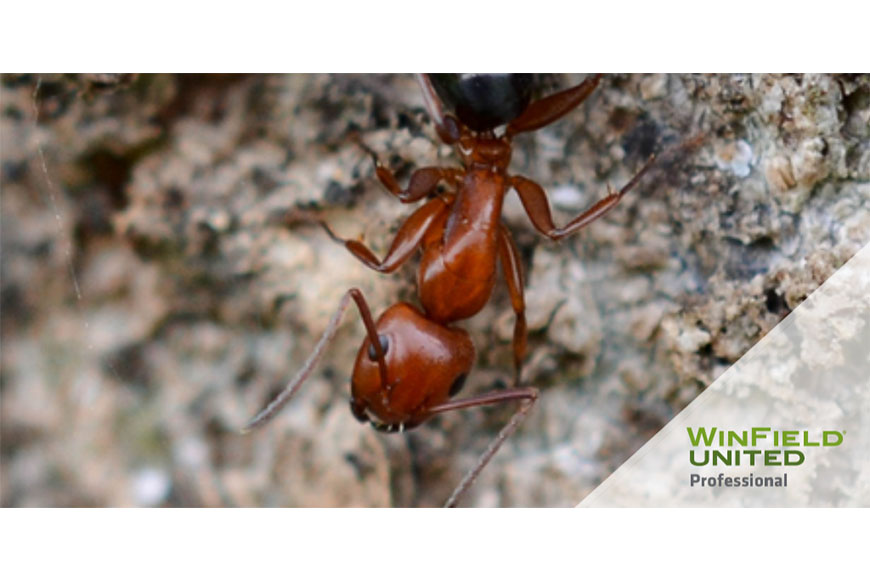 It's beginning to look a lot like ant season, which means you can't go outside without seeing these tiny pests everywhere. They've been around for millennia and aren't going away anytime soon.

As long as ants aren't building mounds on lawns or infesting kitchen spaces, they're perfectly fine outdoors where they belong. It's when they start damaging properties and taking over interiors that it's time to take action.

The Most Common Types of Ants

More than 10,000 ants exist in the world, each with their own habits, food preferences and traits. Some stay far away from humans while others make their homes near people throughout the countryside and cities.

We're not going to go over every species, but we'll definitely take a look at the most common ants you'll have to deal with as the seasons change and the temperatures rise.

Carpenter ants are one of the most destructive species in the ant family. They're not as destructive as termites, but their damage is significant enough to take action. They don't eat the wood, but instead they will bore into it and cause unsightly holes and leave behind sawdust. They're larger than average, mostly black in color, and can be found around residential and commercial buildings.

Fire ants are reddish in color and get their name from the feeling you get when they sting you. They're extremely aggressive and are known to attack in swarms to defend their nests. Not only are they a danger to children and pets, but they're also damaging to lawns as they build large dirt mounds throughout the landscape.

Odorous house ants are quite common and go by other names, such as sugar ants. They are very small and appear dark brown or black. They're often seen in lines along countertops in the kitchen or appearing along windowsills and door frames as they make their way inside the home. They get their name from the odor they give off when crushed.

Little black ants are exactly as their name implies. They're also quite common in households and gather in large colonies with hundreds, if not thousands, of other members. These ants are native to North America and may have more than one queen per nest. Though they usually stay outside and nest in the soil, they will often come indoors to escape from the elements or to look for food.

Pharaoh ants are nuisance pests and invade interior spaces, especially hospitals and similar buildings. What makes them even worse is that they are known to resist a variety of chemical pesticides. They enter homes to feast on food and spills and will often nest inside, increasing their population and causing a major infestation.

How to Prepare for Ant Season

Preparing for ant season means having the right products on hand to combat infestations. Not all products will provide the same benefits since some ants are more resistant to certain chemicals. One species might prefer a sugar bait while another species prefers a protein bait. In fact, ants change their dietary preferences all the time, so you may need different types of ant bait to prevent bait aversion.

WinField United Pro’s own Freddie Ingram is the Pest Control Sales Lead and resides in Oklahoma. He has plenty of advice to offer those looking for the best products to get rid of ants in and around homes and businesses.

We talked to Freddie about the upcoming ant season and wanted to hear what he had to say about getting prepared for spring and summer.

"When servicing sensitive accounts such as schools and nursing homes that might require a 'green' product, I suggest Antixx."

We carry Antixx in our inventory and agree that it combats ant infestations very effectively. It can be used both indoors and outdoors and contains spinosad as the active ingredient. It's derived from a soil-dwelling bacteria and is highly effective against fire ants and other species.

You can expect control of the ants within 24 to 36 hours after using Antixx on the colony.

Freddie also suggests using other borate-based products such as InTice™ or Niban® for sensitive locations.

InTice is a granular ant bait with boric acid as the active ingredient. Not only is it an effective ant control solution, but it also controls other invasive pests like silverfish and cockroaches.

Niban is also a granular bait with boric acid, so you have two different options with the same ingredients to add to your arsenal based on your preferences and how effective they are in your pest management program.

"For the hard-to-reach areas such as voids, cracks and crevices, consider Doxem® dry flowable bait applied with the Precision Delivery System."

Freddie has a good point about this. The PDS penetrates up to 24 inches and provides a targeted, consistent, and precise amount of the product. Doxem is safe to use around electronics and electrical outlets and continues to be effective for up to two years after application.

It contains indoxacarb as the active ingredient. This chemical causes dehydration and death in the ants, including other pest species like crickets, earwigs and silverfish.

"With an increased emphasis on perimeter applications to control nuisance ants before they enter a structure, an effective granular ant bait is a must."

For this, Freddie recommends Advance® 375, Maxforce® Complete Insect Bait, Advion® Insect Granular Bait, Niban and InTice 10 Perimeter Bait. Many of these are also highly effective at controlling other pests, so you get the added bonus of eliminating other insects before they cause an infestation.

These products are an excellent choice to use in a rotational ant control program. Because ants have ever-changing food preferences, Maxforce Complete is a solid bait to use. It contains a specialized formula with a mixture of sugars, carbs and proteins. So no matter if some ants prefer sugar or protein, they'll get it all with this one bait.

Because Maxforce Complete contains the active ingredient hydramethylnon, it acts slowly enough for the ants to infect other ant members in the nest either by bait sharing or direct contact.

Advance 375 is a protein-based granular bait. Using it in conjunction with Maxforce will cater to the ant's dietary needs while delivering potent ingredients to kill them.

Other perimeter ant baits such as InTice 10 and Niban are also effective at keeping ants from infesting the interior. The ants will take the bait back to the nest and infect all members, including the queen. It will only take a couple days to achieve control.

When asked why baits are the ideal product to use for ant control, Freddie says "Baits are great for controlling ants as the product is carried back to share with the colony and its queens. As ant food preferences can vary between species, and a species preference can change throughout the year, be sure to keep them off-guard by rotating bait products."

Bait stations are ideal for keeping the bait fresher for longer. There's also no worry about laying bait out where it could come into contact with people or pets.

Advion is a very effective ant control bait in granular form. It can be used as a spot treatment or for perimeter control, as well as for cracks and crevices. It contains indoxacarb as with other ant control products due to its efficient killing action.

Optigard is an ant control product in gel form, not granular. It comes with syringes in the box and is easy to apply along cracks, crevices, edges and other areas where the ants travel. It contains thiamethoxam as the active ingredient and affects the ants' nervous system, causing death within days of contact and ingestion.

It's highly effective against carpenter ants and other ant species. It can be used indoors and outdoors and in sensitive areas like restaurants, hospitals and food-processing facilities.

Freddie also suggested Maxforce Fleet and Maxforce Quantum in his list of rotational ant products. These are also ant bait gels. Fleet contains fipronil as the active ingredient. If you're not familiar with fipronil, it's used in many liquid and granular pest control products for its effectiveness.

It works on contact and ingestion, so the ants don't even have to consume it to become infected with the poison and die. It targets the central nervous system, causing a lethargic state after some time before complete death.

Maxforce Fleet comes in a tube whereas Quantum comes in syringes. Quantum doesn't contain fipronil. Instead, it contains imidacloprid as the active ingredient. It works similarly to fipronil products since it will affect the ants whether they contact or ingest it. It also affects their nervous system.

Consider using ant bait stations to preserve the bait's freshness, as well as to protect it from the elements when the bait is placed outside. Ant bait stations can also be used indoors, some of which can be applied vertically to attract the ants where they travel.

Now is the perfect time to get ready for the upcoming ant season. As the temperatures rise, more and more ant species will emerge and start to invade yards, homes and businesses.

Having a few of Freddie's picks on hand will ensure you have the right products to combat any pest infestation. Rotating them on a regular basis will satisfy the ants' preferences while also targeting certain bait-averse species and killing them more effectively.