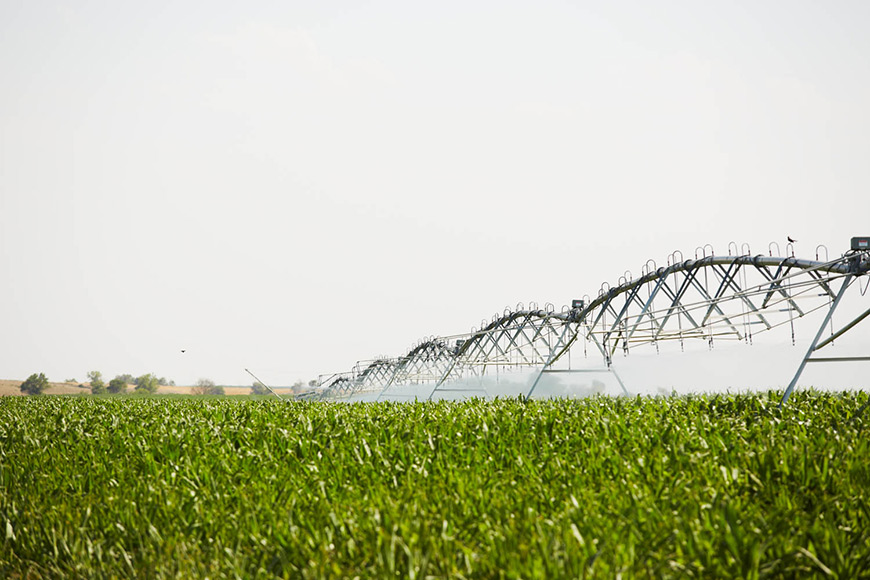 As a farmer, you don’t need another task on your plate; you want something that’s going to help you manage what’s already there. And though irrigation may be an essential part of your operation, it takes time to scout and probe for moisture deficits, set up the pivot for irrigation and do any necessary fertigation.

One of the farmers I work with, Leigh Barry, manages much of his irrigation program through the use of a crop modeling tool as well as through an app on his smartphone and tablet, which has helped him increase his efficiency and productivity.

Leigh irrigates about 800 acres — primarily corn and soybeans along with some alfalfa — on his farm just north of Fergus Falls, Minnesota. He uses the R7® Field Forecasting Tool to monitor the biomass, moisture, nitrogen and potassium levels of his fields to ensure plants are receiving adequate water and nutrition.

The R7 Field Forecasting Tool is a web-based crop modeling solution that aggregates a number of components and dynamics. These include the current weather, the forecast, the ability of the soil to hold moisture and nutrients, the plant growth stage, the temperature and how much water plants are taking up each day.

This information tells Leigh how much water he’ll need to accommodate weather conditions and plant growth stage in order to ensure his plants are set up for optimal ROI potential. It gives him a quick dashboard look at how his fields are doing and which ones need the most attention. He tells me this allows him to prioritize where he spends his time. He doesn’t even have to be physically in the field because he can run his irrigation system remotely through an app on his phone and tablet.

At the start of each season, we put a plan in place detailing how Leigh’s irrigation and fertigation will lay out by field, hybrid and growth stage, and we rely on that plan to project when and how much we should feed and when we should tissue test to calibrate nutrient applications. We can tweak the plan according to what the R7 Field Forecasting Tool tells us. For example, we might think we should fertigate immediately, but the tool might tell us not to do so until the following week once it’s recalibrated to factor in the current tissue test and weather forecast. Through experience, we’ve learned to follow the tool’s lead.

Leigh usually runs nitrogen, sulfur and potassium through the irrigation pivot along with various micronutrients if the situation warrants them. We’ve also done some experimentation with melted potash. One season, we purposely shorted potash in a field. Then, through tissue testing and soil sampling, we found that we could correct that deficit in-season by putting melted potash through the pivot at a lower rate and lower cost per acre versus dry-spreading it upfront. We also got a better response from the plant as a result. That particular field ended up yielding very well for Leigh, and he found this method netted him a higher ROI at harvest due to the lower costs of fertigating with melted potash.

Get back time in the day

Prior to using the R7 Field Forecasting Tool, Leigh used a manual probe to monitor moisture levels in his fields on a near-daily basis. This gave him an idea of what the projected the projected moisture levels would be according to how things looked on that particular day. However, when we adjusted his management strategy to include the R7 Field Forecasting Tool, we were able to add a range of capabilities to his operation that ultimately eliminated the need for the manual probes.

If you have irrigated fields that could use some technology attached, talk with your local trusted advisor about how the R7 Field Forecasting Tool can help you be more efficient with both your time and your resources.

Important: Before use always read and follow label instructions. Crop performance is dependent on several factors many of which are beyond the control of WinField United, including without limitation, soil type, pest pressures, agronomic practices, and weather conditions. Growers are encouraged to consider data from multiple locations, over multiple years, and be mindful of how such agronomic conditions could impact results.

When it Comes to Data, Demand Quality and Personalization